Uwe finished soldering the remaining boards, and sent them to me before his vacation started. I added one connector that was still MIA earlier, and also ordered more lcds and tfp401 modules, and then tested the lot.

We now have the kit for 4 further test systems. 2 for the fosdem office, 2 for the openfest guys. Here's a picture of them all:

Up top, two complete sets, with TFP401 module and LCD, those are for bulgaria. Then the bottom boards, and the tfp401 module are for the FOSDEM offic, where there's already one tfp401 module, and a ton of BPI LCDs. I will be shipping these out later today.

To add to that, i now have a second complete test setup myself.

Mind you, this is still our test setup, allowing us to work on all bits from the capture engine on downstream (video capture, kms display, h264 encoding). We will need our full setup with the ADV7611 to add HDMI audio to the mix. But 80-90% of the software and driver work can be done with the current test setup with tfp401 modules.

I have gone and flashed all the TFP401 modules with the tool i quickly threw together. I created a matching terminal cable to go from the banana-pi M1 to the edid connector on the board, and made one for Uwe and the FOSDEM office (as they both have a module present already).

It turns out that this rom is always writable, and that you could even do so through the hdmi connector. My. My.

Ever since our first successful capture, there has been a howto in the fosdem video hardware github wiki. I have now gone and walked through it again, and updated some bits and pieces.

Wait and see whether the others can make that work :)

The Adafruit tfp401 module gets quite warm, and especially the big diode in the backlight circuit seems to dissipate quite a lot of heat. It usually is too hot to touch.

A usb amp meter told me that the module was drawing 615mW when hdmi was active. So I went and ran most of the backlight circuit components from the board, and now we're drawing only 272mW. Nice!

A look into the box we will be replacing.

FOSDEMs Mark Vandenborre posted a picture of some video boxes attached to a 48 port switch. 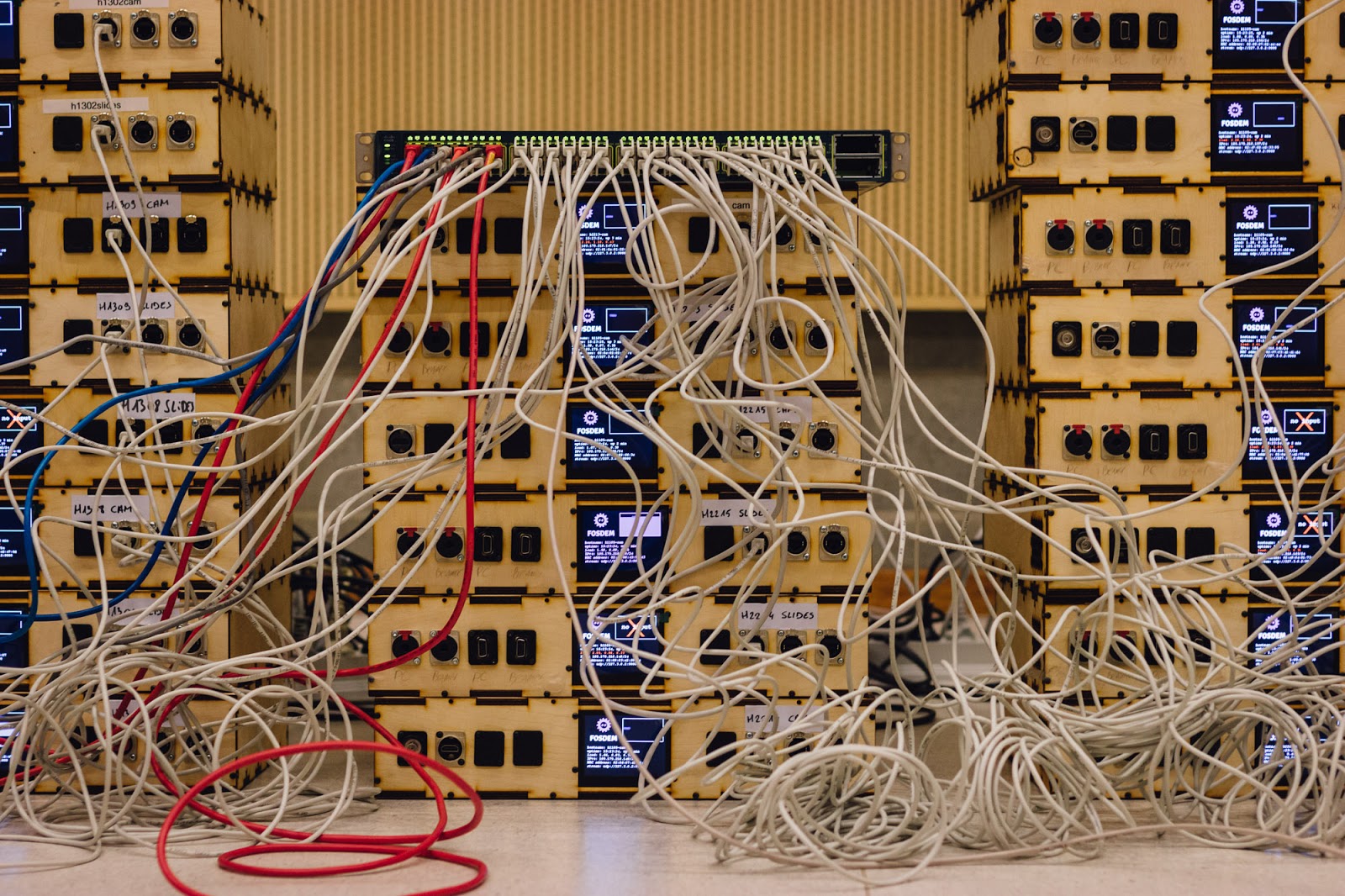 There are 58 of those today, so mentally multiply the pile under the switch by 10.

Marian Marinov from Openfest (who will be getting a test board soon) actually has a picture of the internals of one of the slides boxes on his site:

This picture was probably made during openfest 2018, so this is from just before we rebuilt all 29 slides boxes. One change is that this slides box lacks the IR LED to control the scaler by playing pcm files :)

Left, you can see scaler (large green board) and the splitter (small green board). In the middle, from top to bottom, the hardware h264 encoder, the banana-pi, and the status LCD. Then there's an ATX power supply, then, hidden under the rats nest of cables, there's a small SSD, and then an ethernet switch.

Our current goal is to turn that into:
- 1 5V power supply
- 1 lime2 with ADV7611 daughterboard.
- keep the lcd.
- keep the 4 port switch.
- perhaps keep the SSD, or just store the local copy of the dump on the SD card (they are large and cheap now).

We would basically shrink everything to a quarter the size, and massively drop the cost and complexity of the hardware. And we get a lot of extra control in return as well.

Thanks a lot to the guys who donated through paypal. Your support is much appreciated and was used on some soldering supplies.

If anyone wants to support this work, either drop me an email for larger donations if you have a VAT number, so i can produce a proper invoice. Or just use paypal for small donations :)

Sunxi H264 encoding is where it is at now, i will probably write up a quick and dirty cut down encoder for now, as february is approaching fast and there's a lot to do still.
Collapse